In the weeks after I finished reading Alfredo Corchado's Midnight in Mexico: A Reporter's Journey Through A Country's Descent into Darkness, I couldn't help recommending it to friends and colleagues. By masterfully mixing both his own family's recent history and that of his native country, Corchado has managed to create a chronicle of Mexico's unraveling that is as personal as it is political. 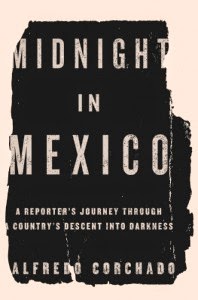 At great risk to himself, he presents us with a story where corruption and impunity (and the voracious appetite for drugs from the United States) have managed to undermine the integrity of the Mexican state.  Yet, as we discuss in this new episode of La Vuelta, he also conveys how deeply connected the United States and Mexico are not just by the "war on drugs" but by ties of trade, family and history.  In his telling, Mexico is no faraway place, it is instead a dysfunctional neighbor whose well-being should matter to all Americans greatly.
Posted by John Gutiérrez at 4:56 AM No comments:

The Tiananmen Massacre as seen from Havana

With all of the coverage today about the 25th anniversary of the Tiananmen Massacre in China, it's useful to highlight the way one of the Chinese government's allies--Cuba--reported the events that took place a quarter century ago.  Enrique del Risco, who is one of the keenest (and funniest) observers of the "cosa cubana" posted an article from Granma on his blog five years ago that highlights the lengths to which the Cuban government went to defend the brutality unleashed against student protesters in Beijing.  It's worth reading again.  Something about "birds of a feather" comes to mind.

Posted by John Gutiérrez at 8:47 AM No comments: