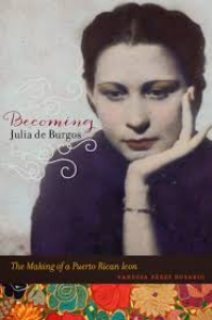 When the Puerto Rican poet and essayist Julia de Burgos died in 1953 the tragic circumstances surrounding her death, in many ways, came to define her legacy.  But as Brooklyn College Professor Vanessa Pérez Rosario writes in her recent cultural biography of the iconic writer, Becoming Julia deBurgos: The Making of a Puerto Rican Icon. (University of Illinois Press, 2014) there was much more to Burgos’ legacy than her demise.  For Pérez Rosario, the goal of her book was to read Burgos in a “new way…focusing on the escape routes she created to transcend the rigid confines of gender and cultural nationalism.”  As she explained in her interview with La Vuelta, Burgos was not only a gifted writer but also one who challenged the powerful male writers of her generation on the island, including those with whom she shared commitment to Puerto Rican independence.

Professor Pérez Rosario will be speaking at John Jay College of Criminal Justice on Tuesday, March 24th from 1:40-2:50 in the President’s Conference Room, 524 West 59th Street, 6th Floor, New York.  The event is free and open to the public.
Posted by John Gutiérrez at 5:10 PM